Dan Rhodes is a renowned English writer and the author of nine books including the flash fiction collections Anthropology: And a Hundred Other Stories (2000) and Marry Me (2013). In 2010 he was awarded the E.M. Forster Award by the American Academy of Arts and Letters. His new book is entitled When the Professor Got Stuck in the Snow (2014). He was interviewed by Flash Fiction Magazine contributor Miles White. 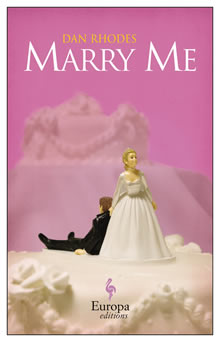 MW: Thanks for talking to me. I think you probably don’t like being interviewed. Is it annoying?

DR: Supremely. It feels like being hauled into the headmaster’s office for a bollocking. I suppose it’s flattering to be asked so I tend to accept invitations, but when it comes down to it I find myself dying on the inside, particularly when being asked questions like the next one.

MW: Your first book Anthropology got mixed reviews but it did get reviewed. What did you think about its reception?

DR: Jesus. As far as I know it’s had a broadly positive critical reception. As ever with these things it reached a handful of squares who were never going to get it, but who cares about them? Anyway, the Czech translation arrived yesterday, and a couple of years ago it made the Italian Top 10. It’s still alive and kicking fourteen years on, which is pretty frigging awesome for a collection of short stories. It’s had an excellent reception, thank you very much.

MW: Anthropology reminds me of the satirical bleakness of Beckett. What do you say to that?

DR: Compare away. It’s been likened to all sorts. When it came out the Sun newspaper described it as being cross between the haiku and Bernard Manning’s mother-in-law jokes. Bring it on.

MW: Why do you think that book got so famously featured in an episode of Sex and the City?

DR: I have no idea, but I can assure you it didn’t sell me a single additional copy. Maybe it would have helped if the book had been in focus, and the title could be read.

MW: Why did you start off writing stories at this excruciatingly short length?

DR: I’d been reading Barry Yourgrau’s very short stories, and decided to have a go myself. I love his work – I started with The Sadness of Sex, which I bought because of the title, and ended up reading everything. My first efforts were weak Yourgrau pastiches, but after a while I found my own voice. As for them all being 101 words long, I just tried it and it worked so I stuck with it.

DR: I used to call them dwalves, but I don’t call them anything anymore. I always thought the length of the stories was spectacularly uninteresting.

MW: What do you make of the term flash fiction? Were you consciously writing in that genre with Anthropology?

DR: I’d never heard of flash fiction until people started telling me I was writing it. And the term never crosses my mind unless somebody is waving it in front of my face, as is happening now.

MW: Many people are writing flash these days. What do you think about the future of the genre?

DR: There’s not much demand for it in the wider world. Marry Me came out in a nice pink edition and had possibly the largest and most positive review the Washington Post has ever run, and yet its sales were modest. The only way flash fiction can possibly thrive would be for everybody reading this review to rush out and buy several copies of Marry Me. This is would show publishers and booksellers that there’s a hunger for it, and I’m only half joking when I say that.

MW: It was more than a decade after Anthropology that you published Marry Me, a sequel of sorts. Why did that happen?

DR: I’d slowly written a load of short pieces over the intervening years, and the time came for me to finally scrape them into a book, which I duly did. Marry Me took about thirteen years to write. I bristle at the notion that because stories are short they are easy. If you’re writing them properly the process should be excruciating.

MW: Your view on love takes “deadpan” to new depths. Is this black humor or tragedy, or cynicism?

DR: I’m inclined to let the readers decide for themselves. Either way I’m hoping to entertain. I’m old fashioned like that.

MW: A line from the movie Tender Mercies goes “I don’t trust happiness and I never will.” How do you plead?

MW: What does your wife think about your writing? I guess I’m asking if you’re happily married.

DR: Now here’s a question I don’t mind answering. When I was writing Anthropology I was hoping it would go out into the world and bring me back a bride. I had an idea that somewhere far away a beautiful girl would read it and fall in love with me, and that plan came together in the public library in South San Francisco in 2003. We’ve been married for ten years now, and have two children.

MW: You have notoriously been at odds with the publishing industry and self-published When the Professor Got Stuck in the Snow. Why did you do that?

DR: For many reasons, none of which have anything to do with flash fiction, so I’m not going to bore your readers with them.

MW: Do you consider yourself a successful writer, however you define success?

DR: When I look at my bank balance I feel extremely unsuccessful, but when I look at my shelves and see ninety-nine editions of my books, I can’t say it’s all been for nothing. And more than anything, I’m proud of all my work. I know writers who cringe at the thought of their early stuff, but I still love my first book as much as all the others (which, to clarify, is very much indeed).

MW: You have your own page on Wikipedia. Does that make you embarrassed or proud?

DR: I’ve never dared to look at it, but I’m glad it’s there. I expect I would be extremely disgruntled if it wasn’t.

MW: Why do you write?

DR: Initially it was mainly to impress girls and have a job where I didn’t have to set an alarm clock, but I think it’s developed into some kind of ingrained sickness. I quit every once in a while but it never lasts.

MW: What does Dan Rhodes want people who don’t know him to know about him?

DR: The same as any other writer – that my books are wonderful things that will immeasurably improve your life, so you’d better get reading them straight away.

MW: Thank you for your time.